How does Earth change over time? 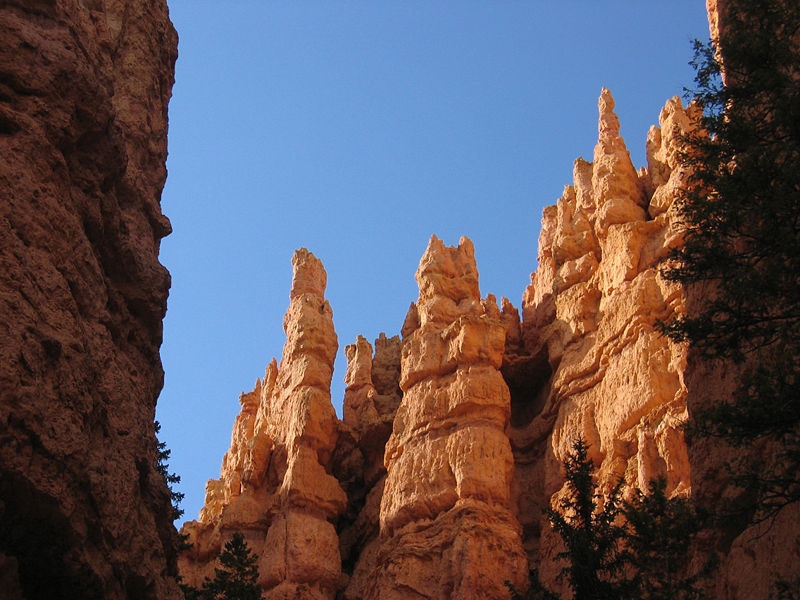 It took a long time for the rocks in this picture to get this way.  A river in the area carried sand and rocks that acted like sandpaper on the surrounding rock walls, grinding away at them for hundreds of thousands of years.  Rain takes away little bits of rock, as does wind, too. 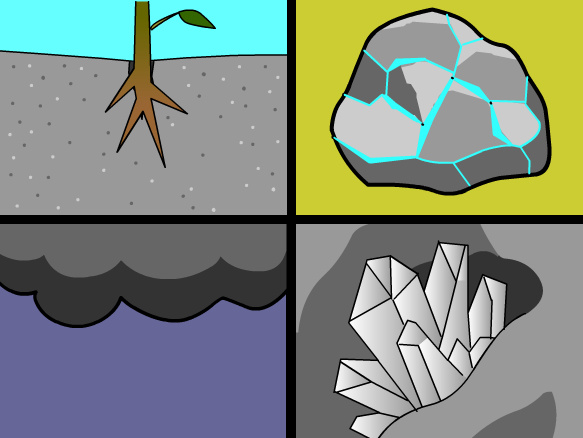 Tim gets freaked out by a bat.  Moby just wants to go skateboarding. 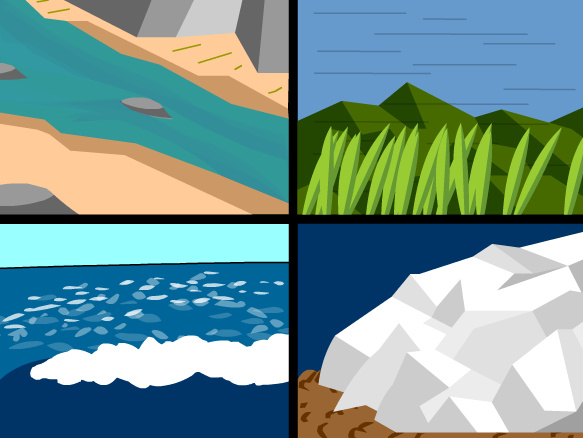 How are rocks formed? 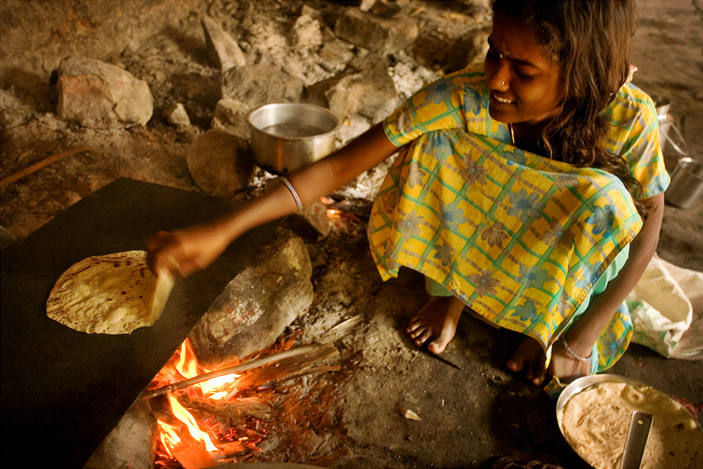 The way rocks are made is fairly similar to cooking.  You start off with lots of separate ingredients, then combine them in certain ways.  During this process, you might be heating or cooling your ingredients, squishing them together, separating them into smaller pieces, or waiting a long time before the meal is finally ready. 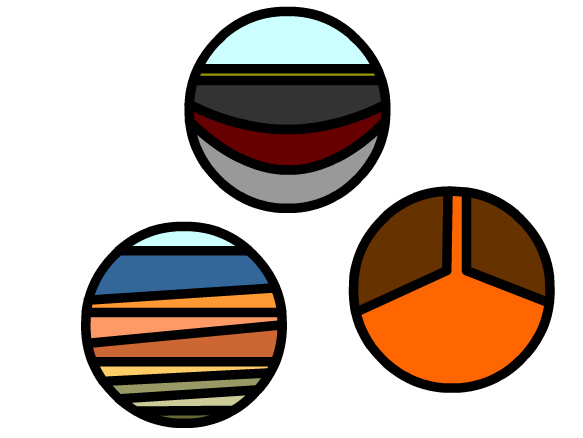 Tim and Moby decide that Earth can be a little too active for comfort.

How can you tell different types of rocks apart? 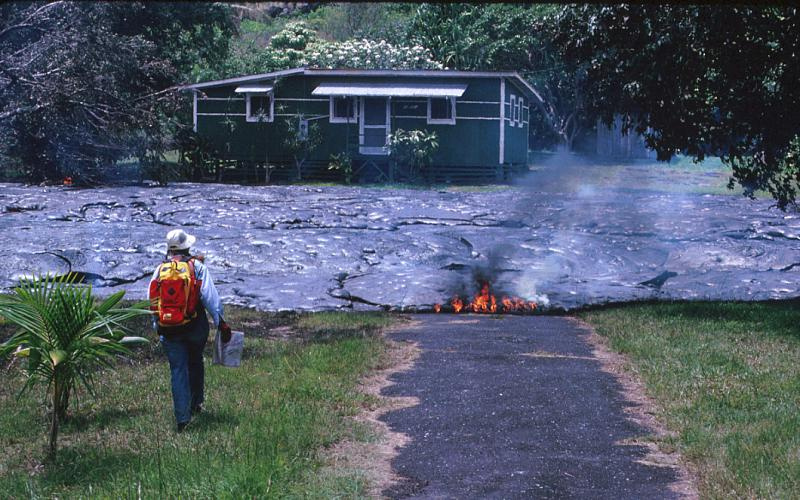 Igneous rocks were formed from molten rock.  This means from lava (on the surface of the earth) or from magma (in the ground).  Molten rock can flow like a liquid, as you can see from the lava surrounding this house in Hawaii.  And, for rock to be molten, it must be really hot.  Look closely, and you can see the asphalt road being set on fire by the lava flowing over it, and a tree in the back left of the picture catching fire. 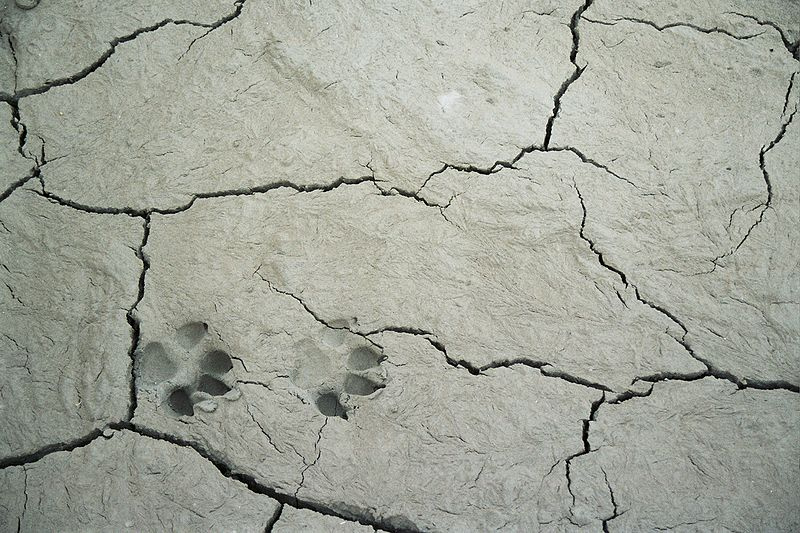 Sedimentary rocks were formed when pieces of rock got cemented together.  This usually happens with mud gluing tiny pieces of rock in place as the mud hardens.  The footprints in the photo were made by an animal while the mud was still wet.  Look even closer, and you can see delicate feathery marks left in the mud by aquatic plants.  As the mud dried out, cracks formed (including one going through the footprint), and eventually the whole area became hard rock. 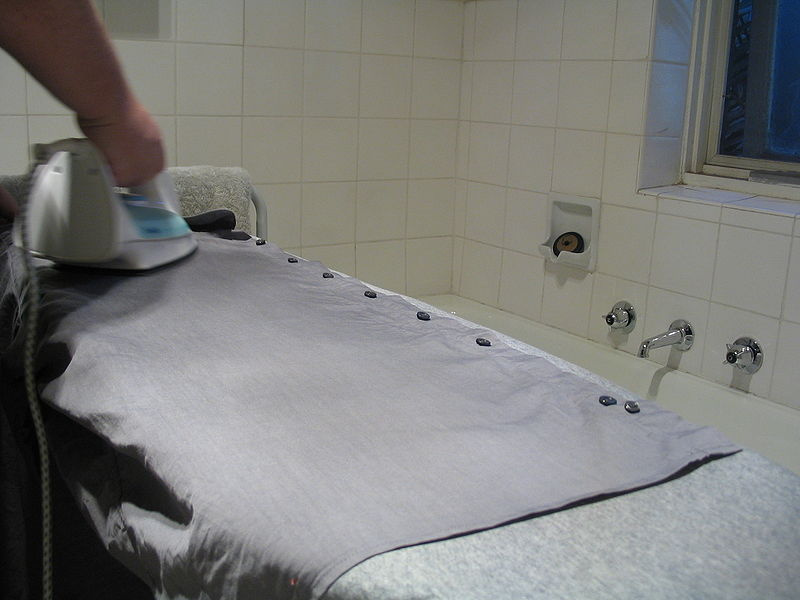 How do you iron a shirt?  The iron needs to be hot, and you need to press down on the wrinkled shirt.  If you were doing this to a rock, with an extra hot iron, and lots of pressure, and loads of time, you would make a metamorphic rock. 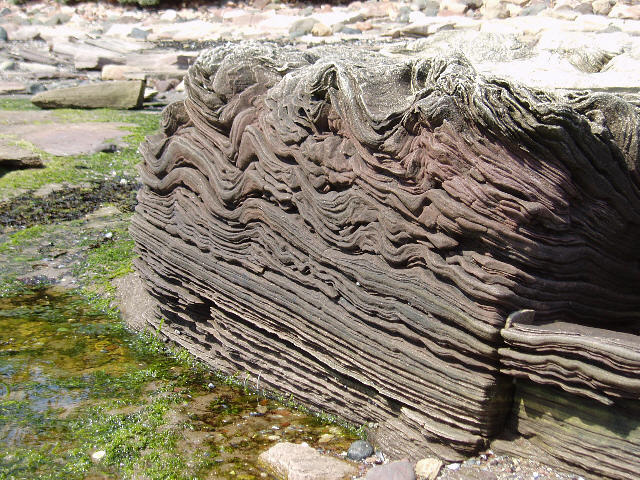 Metamorphic rocks are formed when lots of heat and pressure are added to a rock.  The heat softens up the rock so it can be squished or stretched out by pressure.  When the rock cools down again, it keeps its new folds.  For this example, the top part of the rock was squished in from the sides while it was hot and soft. 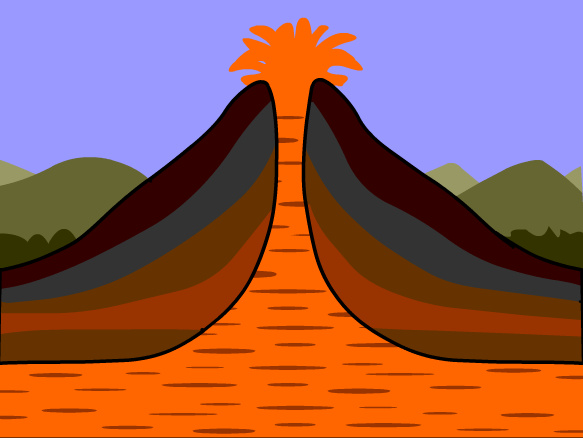 Tim is startled by being magically transported about the earth.  Moby is a bit of a vandal.

How are layers of rock deposited? 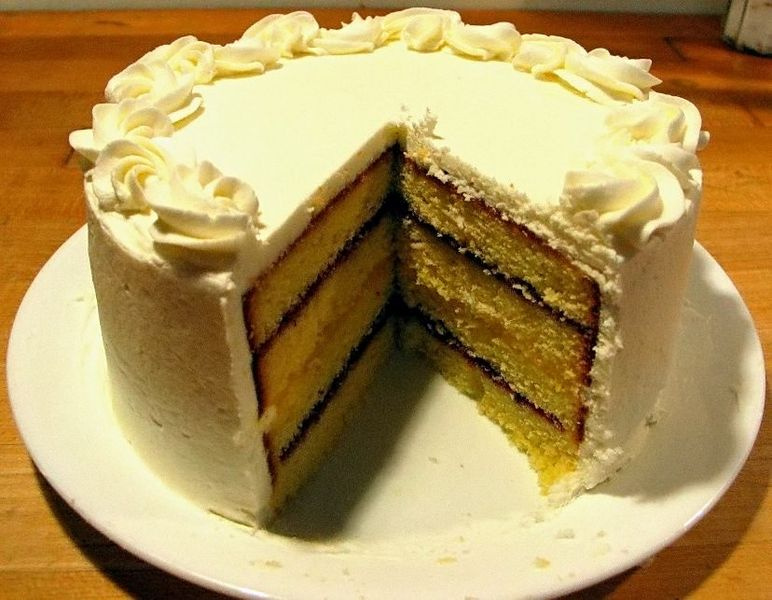 Mmmm.  Cake.  Specifically, layer cake.  The bottom cake is put down first, followed by a layer of filling, followed by another slab of cake.  This process repeats until the cake is as tall as the baker wants, and is then covered with a layer of frosting. 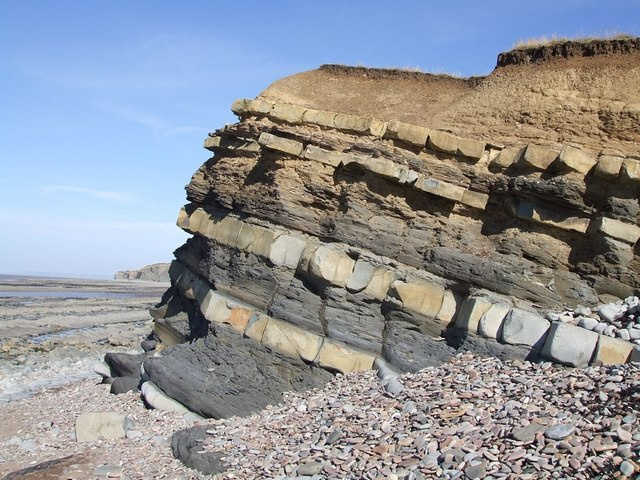 Think of how a layer cake is made, and you can decode how a lot of geology was formed.  If you see layers in a cliff, you therefore know that the bottom layer was made first, followed by the layer on top of it, and so on.  Occasionally, you may come across rocks that were tilted upside down after their layers were made, but usually it is a pretty safe assumption that the oldest rock layers are on the bottom.  In this example, the rocks were tilted at an angle after layers were laid down, and the brown top layer was then deposited.

How do geologists figure out the order in which layers of rock were deposited? 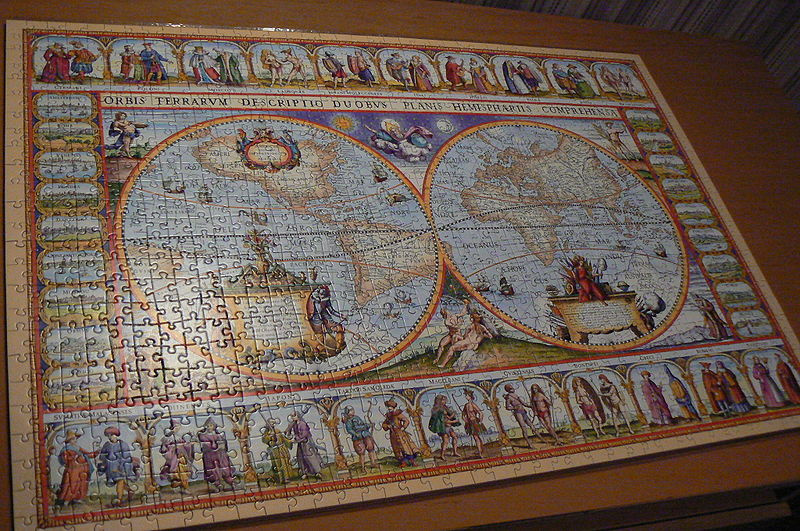 You can think of geology as a puzzle.  By carefully examining and putting together lots of different pieces and facts, geologists can figure out what happened to rocks that they see. 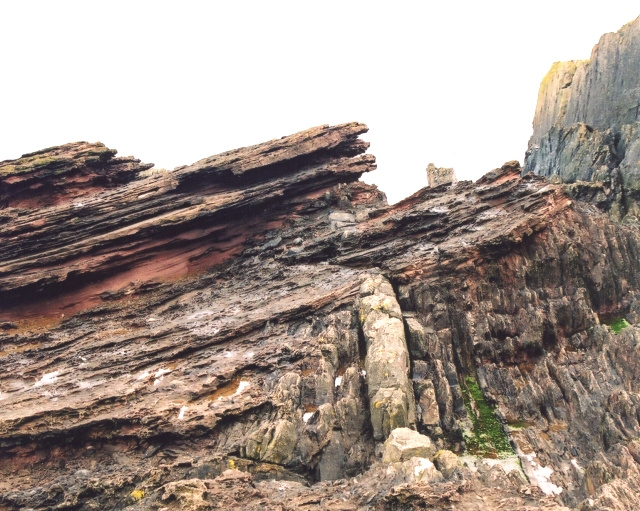 Rock faces can be quite challenging to figure out.  Which layer was formed first?  Did the layers get tilted around?  Was there erosion that removed some rock?

This particular spot is called Siccar Point, and is found in Scotland.  Over the years, many geologists have spent time here, gazing at the rock face and forming different theories about how the surface of Earth has changed over time.

How did geologists figure out how old Earth is? 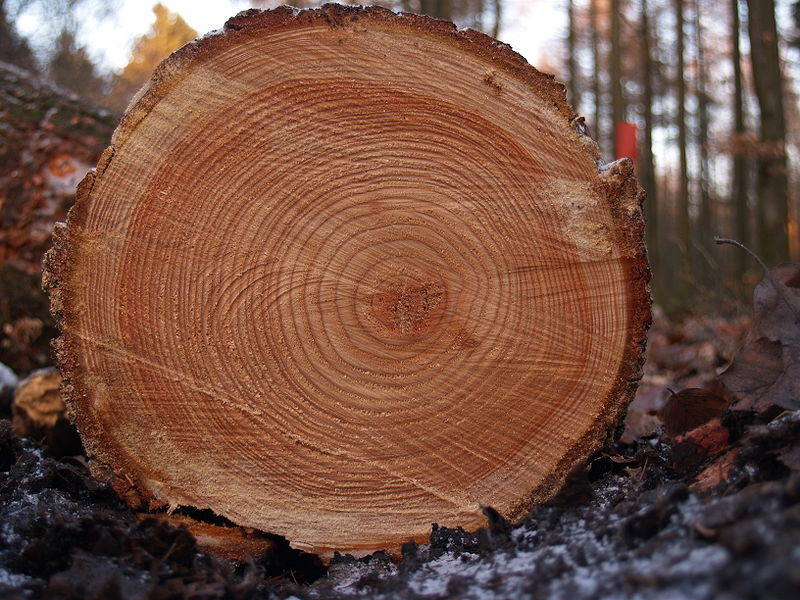 Trees grow in a particular way.  Each year, they add a new layer of material to their trunks.  These growth periods show up as rings.  By counting the rings, it is possible to figure out the age of the tree. 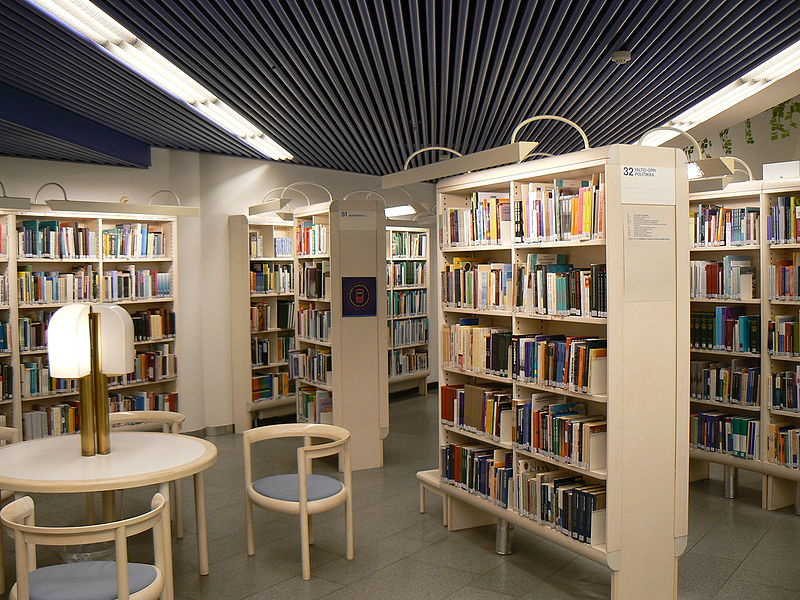 Layers of rock are sort of like tree rings.  However, it may take tens of thousands of years, or longer, to make a layer of rock.  These layers of rock will be spread across a landscape when they form.  Over time, erosion may remove some parts of the layers.  It helps to think of layers like library shelves.   A layer of books may stop at a walkway, and then keep going on the other side.  The same thing is true for rock layers that have been interrupted or have had parts removed. 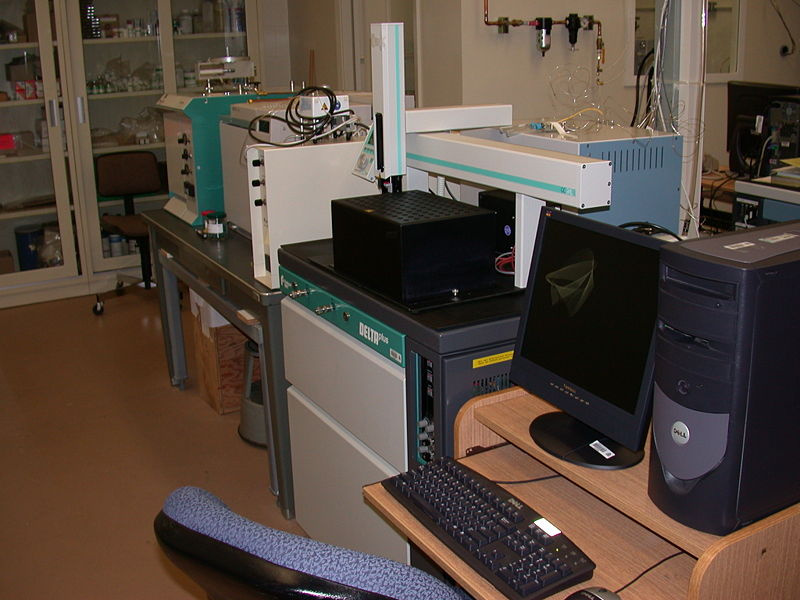 To accurately figure out the age of a rock sample, fancy lab equipment is needed.  The sample is ground up and put in the machine, which is able to examine different types of rock molecules to determine their age.